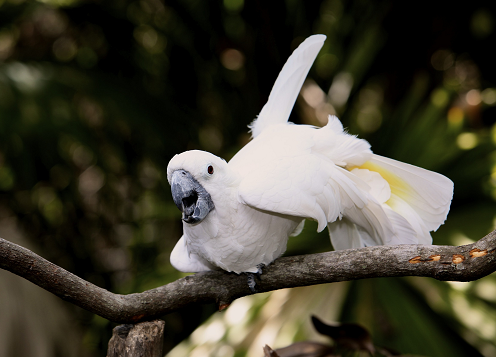 What causes sexual behavior in birds?

There are many different behaviors witnessed by owners of birds that are associated with sexual maturity and hormone fluctuations. At certain times of the year, birds are under the powerful influence of sex hormones and will behave instinctively in distinct ways that you may not have witnessed before. The behaviors will vary with species and individuals. They are not necessarily seen with every bird.

Sexual behavior may be induced by many factors such as seasonal changes in daylight hours and temperature, environmental influences, diet, and interactions with owners or favorite toys and objects. Wild birds (particularly parrots) normally have a very intense relationship with a mate. Humans may cause frustration or confusion in their birds with what may be our inappropriate responses to their sexual behaviors. Constant petting or stroking a bird’s back is often interpreted by a bird as mating behavior.

"Constant petting or stroking a bird’s back is often interpreted by a bird as mating behavior."

What kind of behaviors might I observe in my bird?

One of the most common behaviors in a sexually excited bird is regurgitation. This represents an offering of food that a bird would give to a "mate" during courtship. Budgies, cockatiels, cockatoos, and lovebirds seem to do this the most often. These birds may actually "pair bond" to a favorite toy, mirror, or another shiny reflective surface. The general consensus is that you should remove the toy or mirror to reduce the attachment the bird has to the object.

Caution: vomiting and regurgitation can also be signs of illness in your bird. Consult your avian veterinarian if you are unsure.

Some birds have more extreme behavior changes including territorial aggression, screaming, and/or feather destruction. When sexually stimulated, the bird may strut around, display feathers (wings and tail fanning), become aggressive, and/or become more vocal. Some will bite and chase people around the house. Others, however, will become more affectionate and loving. Female birds may even lay one or more eggs despite no male bird being present.

Some birds seek nesting places such as boxes, cupboards, closets, drawers, or other hiding places. You may observe paper or wood chewing or shredding, gathering behaviors, and changes in vocalization, especially mornings and evenings.

What should I do if my bird exhibits sexual behavior?

Correcting these behaviors is usually unnecessary, as most birds will return to "normal" in six to eight weeks. There will be exceptions; some birds exhibit these behavioral changes persistently, rather than with a normal seasonal pattern. An owner may actually inadvertently reward a behavior by paying attention to it.

"Do not encourage sexual behaviors, as the "problem" may escalate."

Do not encourage sexual behaviors, as the "problem" may escalate. The behaviors should be discouraged or ignored. Physical hugging and scratching around the head may be acceptable if done infrequently, but scratching the back, rump or hind end may sexually stimulate your bird. Cranky birds should be left alone. Regurgitating birds can be removed to another location to help diminish the behavior. Masturbation should be ignored and not encouraged. Nesting spots and nesting materials should be rendered inaccessible. Shortening the indoor daylight hours to a winter-like photoperiod, usually less than six hours per day, will deter some birds. Redirect your bird's attention towards toys and healthy interactive play with you.

If the behavior becomes problematic, consult an avian veterinarian or behaviorist. Your avian veterinarian may discuss a variety of changes to make in the cage or home environment. Behavior modification to deter stimulating the bird’s behavior will be beneficial. In many cases, hormone therapy will be necessary to alter sexual behavior. Hormone implants may also be discussed if egg-laying or aggressive sexual behavior cannot be diminished by changing the environment.

© Copyright 2022 LifeLearn Inc. Used and/or modified with permission under license.